I’m really a terrible photographer. I have no idea what I’m doing. If you want to have a long, thoughtful conversation with someone about lenses, I am not your huckleberry. I found a digital camera that lets me do what I want to do with relatively little technical fiddling (the marvelous Leica D-Lux 6, which makes me very happy), and I got into the habit of screwing around with things in Lightroom. That is the sum total of my photographic expertise. 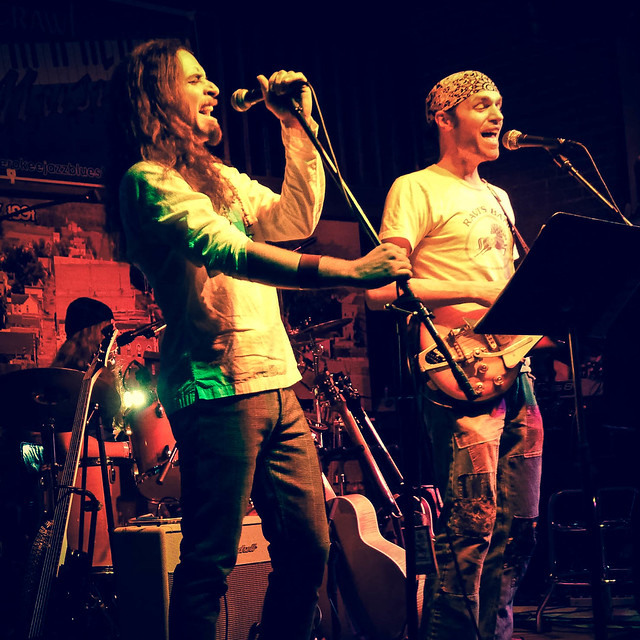 Mostly, because I’m still really trying to teach myself how to do and to think about photography, I try to find situations, settings, or sets of conditions that force me to think about how I’m shooting. My current focus (hurhur) is on live musical performances in low lighting (you may have noticed — it occupies an alarmingly large proportion of my Flickr stream). The D-Lux 6 is really, really good for that sort of thing, which is one of the many many reasons why I like it so much. I shoot without a flash, even in really dark spaces, and very rarely boost the exposure when I process the images. There’s just something about the quality of stage lighting that I’m trying to figure out, and the results are sometimes kind of cool. The other reason I avoid the flash is because I want to replicate the effect of being there are seeing the show, sitting in the dark while the stage lights make the band the center of attention. I use some vignette effects to emphasize that feeling, so the lit band member(s) will appear to pop out of the shadows. 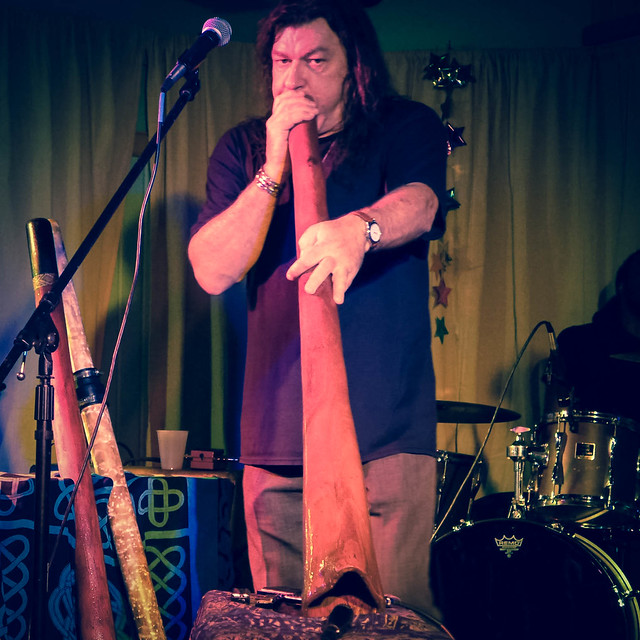 One thing I noticed as I collected images on the Cherokee Jazz & Blues Festival pub crawl last night was how the three Saturday venues were lit. It’s worth mentioning, I think, that the bands at The Gathering Place (Sena Ehrhardt) and at Loft 101 (Harper & Midwest Kind) were playing under house lights (and, I think, using some in-house sound) while the band at the VFW post (Jim Suhler & Monkey Beat) had clearly brought their own lights (there are no house lights at the VFW, as far as I know). 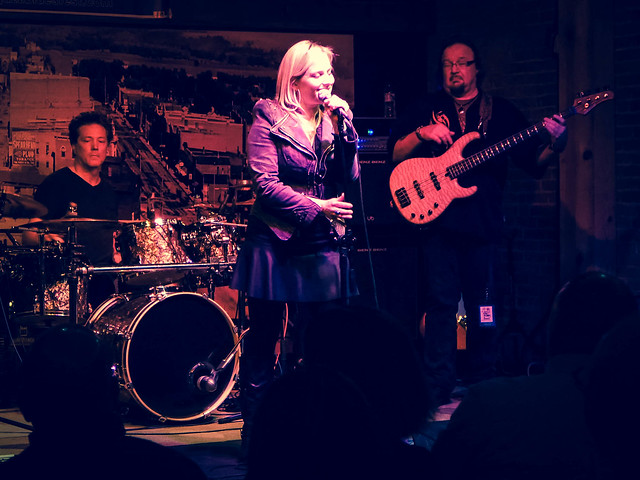 I’ve taken a lot of pictures at The Gathering Place, and I almost always have the same two problems to solve when they use the house lights as-is: the dominance of a really saturated, powerful set of red and yellow tones in the general lights and the blinding white spot on center stage. In order to avoid having everything wash out in a sort of virulent orange glow, I almost always have to cross-process, fade, or otherwise really drop the vibrance and the color saturation. It’s tempting to use the flash to counteract some of the redness, but the very bright center spotlight means that using a flash risks turning whoever is standing under it into a glowy alien. I often find myself wanting to shoot it in black and white, just to cope with the combo. I’ve had my best luck there when they’ve put up a black curtain background and stuck to a light mix without the reds and yellows, or when they’ve pulled in more blues and greens and used the smoke machine. The background at the rear of the stage — a big mural/map of Cherokee — reads very reddish-brown/sepia, and bounces those reds and yellows around a lot. 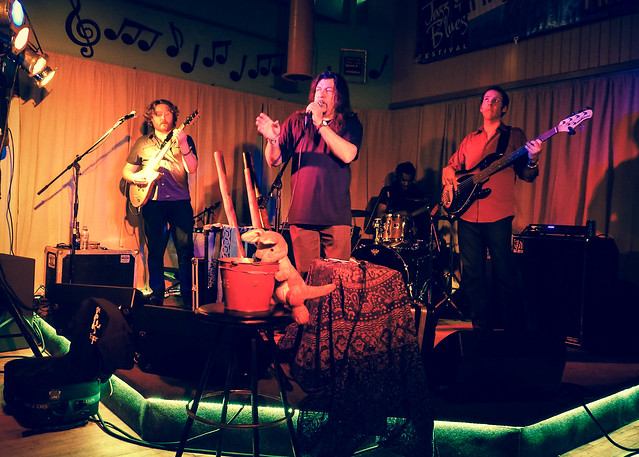 Loft 101’s got a different sort of spoiler in the mix. There’s no hard, bright spot, but they do have a sort of rotating color thing happening along the bottom of the low stage platform, and the mix of light in the space (which is itself very bright — white walls, etc.) tends to be a little on the red side, too (although they do have a mix of blues running that’s a little cooler, temperature-wise, than what the GP uses). I usually shoot “happy” with the D-Lux 6 (a warm color setting, bright, saturated — lots of reds and yellows), but even when I tried a standard, less vibrant setting, I still had to do some cross-processing and futzing about to get a less bloody result. It didn’t help that the bass player was wearing a red shirt! The beige curtains that back the stage tend to reflect and emphasize the various colors in the stage lights, which can wash out whatever’s in front of them. 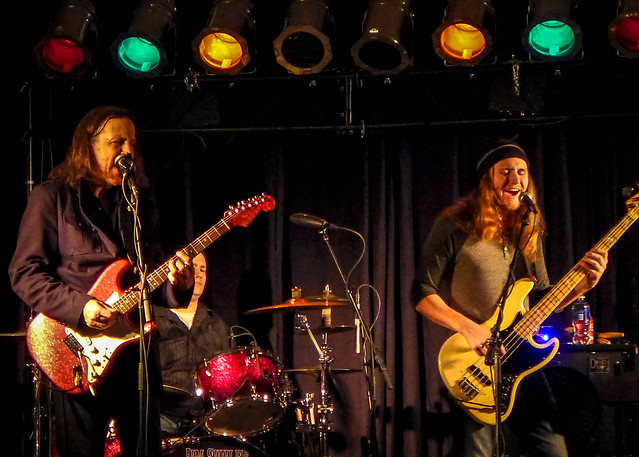 The light at the VFW was, I think, actually the best setup of the night for taking pretty straightforward, flattering pictures. It was certainly the most natural-looking for skin tones! I really didn’t have to do much at all to the pictures I took. The black curtain background (which I’m pretty sure came with the band — it covered the glass block windows and grayish-bue cinderblock walls that one usually sees at the VFW), unlike the mural or the light curtains in the other two venues, handled the mix of colored lights better. Against it, the players were lit clearly and naturally, not nearly as over-saturated or over-red, although I think the actual lighting choice wasn’t all that different from the other venues. There’s still quite a lot of redness, but the black background makes it better.

I think that if I were going to make a recommendation to someone setting up a lit stage for bands, I’d ask for a black background at least.