As I read John Dyck’s “In Defense of Country Music” the other day, I found myself remembering a compliment, thinking of an amazing recording by an amazing woman, and struggling to disentangle the reasons why some of what Dyck said rang a bit odd to my ears. Welcome to the mess my reflections on the subject have made.

The Alien at the Fairgrounds 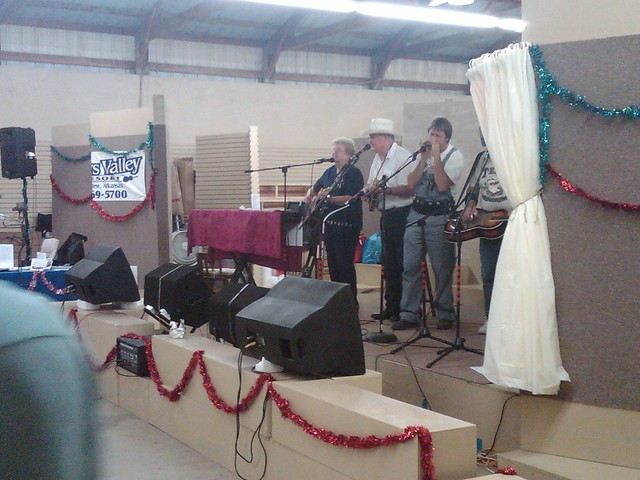 Back in 2011, a friend of mine was asked to play at the 36th Annual National Old-Time Country & Bluegrass Festival in Le Mars, IA. This is a BIG event, held at the county fairgrounds in Le Mars, and it brings together a truly marvelous collection of musicians of all ages. They perform, they jam, they listen, they sit in on each other’s sets and share the tricks of the trade, and (bless them) they welcome the occasional weirdo newcomer to the family. It’s a pretty impressive gathering of folk and traditional country music styles and idioms. I heard a great yodeler from Ireland while I was there, as well as some sweet harmonies, a family full of pre-pubescent fiddle prodigies, some dobriffic dobrofication, and a whole lot of serious pickin’ on all of the many stringed things one can pick. My friend Andy (an occasionally folky singer-songwriter with a prog rock history) was there to do a few small acoustic singer-songwritery sets, backed up by me on vox and violin and a local upright bass player named Joe. Of the three of us, Joe was the biggest immediate hit with all and sundry — he ended up being asked to join other folks in their sets. This was only to be expected — Joe is a terrific bass player in any style you please. I sort of blundered around, honestly — I play a lot of different instruments and sing in several styles, but I was trained on classical violin, and my small amount of vocal education was in the same territory. I was a fish flopping madly out of water there in Le Mars, and I knew it. Still, we tried to make some good music, and even though none of what we were doing really fit in with the rest of what was going on around us, I think we did fairly well.

After our last set, in which we punted on some folk music and protest songs (Andy’s a big Pete Seeger fan), I received what I believe is probably my favorite compliment ever, as a musician. An older gentleman with a fine cowboy hat, a big belt buckle, and a sweet Texan drawl — followed by his lovely wife, whose hair certainly put her as close to God as it was reasonable for her to be — came up to me and said: “Well, it ain’t country…but it’s all right.”

Then he smiled kindly and ambled on his way.

That same year, old-time/bluegrass music legend, feminist, and labor activist Hazel Dickens passed away. You can see and hear her in John Sayles’ Matewan (1987), helping to tell the story of the Matewan coal strike in 1920. She was one of the first women to record a bluegrass album of her own in 1965, collaborating with Alice Foster on Who’s That Knocking:

Hazel Dickens had the perfect voice for the music she played and sang — the high lonesome sound characteristic of old-time country and mountain singing in Appalachia — and the life to properly inform it. Her music and her activism were deeply bound together because she sang about what she lived.

That high, lonesome sound is not a polished, rounded vocal tone. It seems flat and hard to ears unaccustomed to it; to those whose notion of what “good” singing sounds like is closer to the opera than the opry stage, it might even be grating or hard to listen to. Yet it is exactly the right tone for the music it produces.

Stripped bare of instrumentation, isolated and raw and open, her singing is revealed as a paradigmatic example of a distinctive musical style with its own rules and norms. She’s not unpolished or untaught or a poor singer — she’s doing exactly what the style demands, using all of the many tools at her disposal. Her ornaments and changes, her dynamics — it’s all deliberate. She doesn’t wobble weirdly out of tune. There are no accidental noises here caused by faulty breath support or weak technique (to be fair, she usually sang at 11, so this control wasn’t always as recognizable over a PA as it is in this recording). There is a different application of vocal technique here that fits the rules of her regional style just as it should. She’s not a poor singer making the best of her roughness — she’s a good singer of this kind of song.

Could “Pretty Bird” be sung in a different style? Sure. I’ve done it (not well, but I’ve done it). I’ve heard bluesier renditions, and country-but-not-so-high-and-lonesome takes that add instrumentation. It’s a good damn song, and a number of different voices and styles could make something beautiful of it. I am reminded of the nice recent Hi-Phi Nation discussion of covers, and it occurs to me that this is the sort of song that holds the door open for a wide range of distinctive interpretations and performances, any of which could be wonderful.

Just the same, there is something important about Hazel’s version, and about the kind of sound she made and the reasons why she made it that way, that I hesitate to leave in cover-land (I’ll spare you my nattering on music as a form of life…).

The Ringing in My Ears

When I read Dyck’s piece, there was one paragraph in particular that made me intensely uncomfortable, and it’s taken me a few days to figure out why:

These are not people with delicate taste. That’s the whole point! They’re unsophisticated. They’re straightforward. To borrow a term from Christine Korsgaard, country music appeals to people through their practical identities, in the ways that they see themselves and construct their lives. This is why so much country music is tragic. It portrays the mundane sorrows and struggles of working-class people. It reassures us that it’s okay to be dirty and sweaty and ugly.

I get what he’s trying to say, I think, and I don’t entirely disagree — there is, as any number of musicologists have pointed out, a notion of authenticity in various strains of country music that leans heavily on a grounding in the practical realities of rural and working-class life.* This music (any music, really) is deeply entangled with the identity of the community in which it lives and grows. Yet I think something is missing in at least one of the examples Dyck uses to make his case (the Brad Paisley tune), and this missing thing is a distinction worth taking seriously.  There is an important difference between the music born from the life of farmers and miners and the music that deploys that life as a sign of authenticity for consumers who don’t necessarily live there anymore. I’ve blogged very sloppily about this before — it’s a major feature of contemporary bro-country, which tends to be an assembly-line-produced mess of redneck identity signifiers masquerading as “authentic” country music. A pop-country performer like Brad Paisley (who is good at his job — don’t get me wrong!) bears little to no resemblance to someone like Ralph Stanley or Hazel Dickens. He and his usual co-writers produce songs about country as an identity. Hazel Dickens wrote and sang from it, and I think that makes a big difference — or should make a big difference — in how our aesthetic judgements handle these things.* Country music like hers isn’t bad music or unsophisticated music that uses its messiness to signify authenticity — it’s representative of a distinct body of styles with its own natural history and quality markers, which is exactly what constitutes its authenticity.

I also disagree with the notion that the creators, performers, and fans of some of this music lack delicacy of taste (although I suspect I may possibly be reading something into Dyck’s language here that he doesn’t intend). Arguably, I think it wouldn’t be too hard to make the case that they possess exactly the sort of delicacy of taste that Hume had in mind, although seeing why requires us to decouple the Humean approach to “delicacy” from our own commitment to the aesthetic norms and assumptions of European classical music of a certain few hundred years (not to mention a whole host of vaguely classist ideas about “sophistication” — and I’m NOT calling Dyck a classist! Don’t @ me, bro!).

When the kind gentleman from Texas spoke to me on the fairgrounds in Le Mars, he wasn’t just doing a bit of boundary-policing relative to his expectations of what belonged at an old-time country and bluegrass festival (although he was definitely doing that). He was a sophisticated listener well versed in the form, and he knew exactly what he was — and was not — hearing from me.

It wasn’t country, but it was all right.

* Related: I really like Jeanette Bicknell’s approach to the role(s) of authenticity in our understanding of song and the practice of singing. Of course, talking about what counts as “authentic” or “good” country music is a great way to start a fight with country music musicians and fans, who have been having this discussion about what country music is for a long time now. I think all the Humean critics of country, however, should safely and easily agree with me that bro-country, as a rule, is straight-up shite. ;)